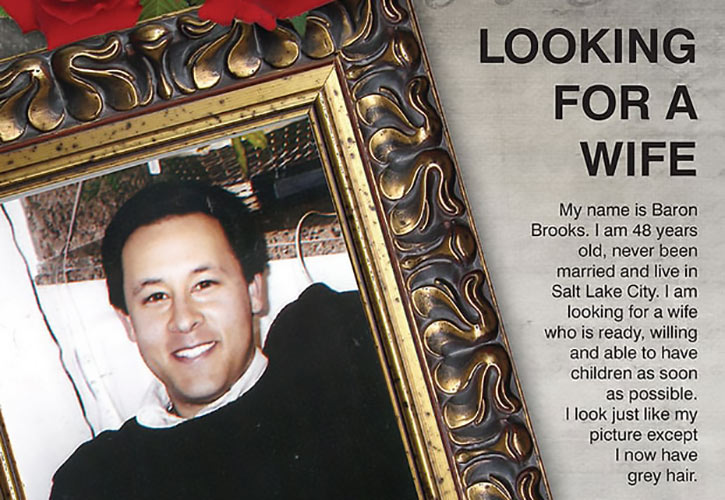 Baron Brooks says he was beyond shocked to find out his 78-year-old father took out a classified ad on Baron’s behalf to help find him a wife.

The $900 ad in Utah’s Coeur d’Alene Press featured a photo of the 48-year-old bachelor indicating he was looking for a wife “who is ready, willing and able to have children as soon as possible.”

“My father did this without my consent. I can’t even describe to you how embarrassing and ridiculous this is,” Baron told the Spokesmen-Review. “He just does this crap. … If I shared some of the stories, you wouldn’t believe it. He just does weird stuff, and nobody knows why.”

According to the ad, Baron’s father would like his possible daughter-in-law to be between 34- 38, not taller than 5’8, politically conservative and willing to be a stay-at-home mom.

Prospective brides will be flown to Utah for all expenses paid meet and greet with Baron’s father this weekend.

And while the Salt Lake City businessman may not approve of the romantic cattle call, he’s allowing his father to go forward with the interview process of potential mates.

“What am I supposed to do? He already did it. No sense in defusing a bomb once it’s already gone off,” he told the Spokesman-Review. “It’s worth a shot. Can’t hurt.”

Would you let your parent help find you a spouse?