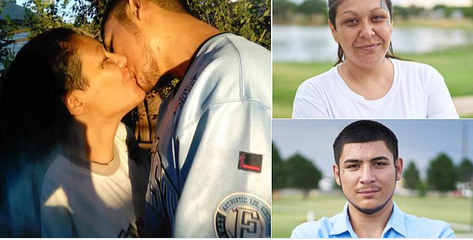 A New Mexican woman and her son are going public with their love affair to bring awareness of their forbidden romance after a New Mexican court threatened to lock them up for 18 months for incest if they continued seeing each other.

After giving up her baby boy for adoption 19 years ago, Monica Mares, 36, connected with her son Caleb Peterson on Facebook over a year ago. The couple tell Daily Mail Online, it was love at first sight and the relationship became sexual weeks after meeting. However incest is a crime in 50 states so the courts in Clovis, New Mexico banned them from seeing each other or risk 18 months in jail. However, they are willing to fight to be together because they are “madly in love,” according to the Daily Mail.

Ms. Mares is willing to lose custody over her 9 children to be with Mr. Peterson. The two decided to go public to bring awareness to Genetic Sexual Attraction (GSA) relationships. It’s not unheard of for blood relatives such as half-siblings, first cousins and a parent/child to develop romantic feelings for each other after meeting for the first time as adults. However will the public rally for this taboo relationship?

Do they have the right to be together?

New Mexico mother and son fell in love and will go to JAIL to defend their relationship | Daily Mail Online https://t.co/1AEaPfE0Uo