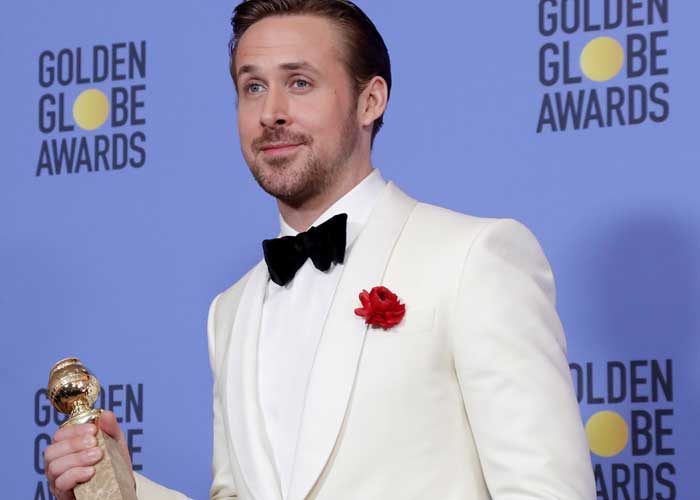 Ryan Gosling plays characters that make women swoon with movies such as La La Land and The Notebook, but turns out the actor is romantic off screen as well.

Ryan Gosling won the Golden Globes statue for Best Actor in a Musical or Comedy for La La Land Sunday night, and he dedicated part of his acceptance speech to his “lady” Eva Mendes and her recently departed brother.  He thanked Mendes who held down the fort raising his daughter while pregnant with their second child, and taking care of her sick brother during production of La La Land.  He ended his speech by dedicating his Golden Globe award to his wife’s brother, Carlos Mendes.

Gosling has gushed over his lady love before telling Hello! Canada last year that Eva Mendes is his soul mate. “I know that I’m with the person I’m supposed to be with.”

Gosling is a double winner in our book.

Divorce Court @divorcecourt Today on #DivorceCourt with @JudgeFaith she says he lost all motivation during the pandemic and is now lazy and add… https://t.co/Q7LUKSTEDG 28 weeks ago
Open in Twitter

Divorce Court @divorcecourt Today on #DivorceCourt with @JudgeFaith, he says he makes an honest living as a #cryptocurrency investor but she’s… https://t.co/hFXVB6osdL 29 weeks ago
Open in Twitter

Divorce Court @divorcecourt Today on #DivorceCourt she says his million dollar inheritance is getting in the way of their future! Will… https://t.co/qLcrxMmX5L 29 weeks ago
Open in Twitter

Divorce Court @divorcecourt It’s time for the #QuestionOfTheDay: Honest answers only! Is it a deal-breaker if someone you’re interested in does… https://t.co/QkCr2HfUr6 29 weeks ago